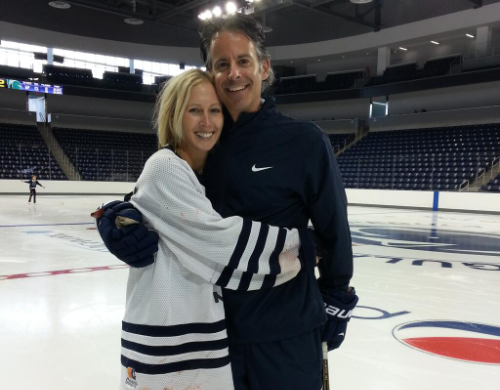 3. Beantown Classic – Scouting the Forwards
(Over The Boards)

Forward A.J. Greer, a Nittany Lions commit scheduled for 2015 entry, participated in the highly-regarded Beantown Classic showcase from August 10th through 14th. And did quite well for himself - OTB rated him the number two forward there and had this to say:


Greer started strong here and never let up. Consistently created chances and used his outrageously long reach to score a number of creative goals including a wrap-around and a full-reach fake that got one of the better goalies here to bite just enough for Greer to bury in the ensuing opening. Surprisingly deceptive and will only get better. Would like to see more snarl from the forward but he did show a mean streak here at times. Youngest player in the pro division but finished second in overall scoring.

We got ourselves a pretty good one here, guys.

The Big Ten Hockey Blog predicts that PSU will finish last in the conference, largely due to the unknown quantity of conference play for the young program.

I'm not going to say too much about it here, because I'm still contemplating writing a full post in response (I did fire off a few points in the comments over there if you're interested). However, I think relegating the Nittany Lions to the basement out of hand because the other league teams "have been doing it for decades" is a mistake. Banners don't skate, as the saying goes, and I sincerely cannot identify a single reason to say that Penn State is any worse than Ohio State or Michigan State right now. Given the whole 2-1-0 situation against that pair in 2012-2013 with eight pure ACHA players on the roster, there is reason to see it the other way around.

Most coverage of the ice's initiation focused exclusively on Gadowsky, which is understandable to a degree, as the men's team is the one that draws the eyeballs. But also a mistake, because it meant whiffing on a story like this:

(Belated) happy anniversary guys! The next 21 go pretty fast, from what I hear. 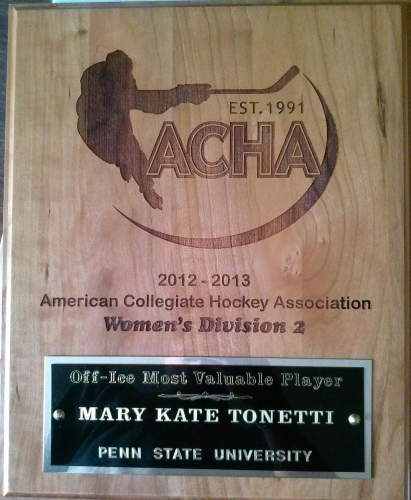 It certainly took a while, but the Women's Ice Hockey Club's Mary Kate Tonetti finally has her ACHA Women's Division 2 Off-Ice MVP award after being named its winner back in March.

Sticking with the ACHA women, some pretty great hockey will be coming to York on February 22nd and 23rd in the form of the College Hockey East playoffs. The four teams that make up this season's inaugural edition of CHE (PSU, West Chester, California (PA) and Delaware) were half of the field at the 2013 ACHA WD2 National Tournament, including both championship game participants.

Here's the obituary for Vance McCullough, the long-time head of Penn State's club sports who passed away unexpectedly last Monday at age 69.


Vance was a driving force in creating a club sports department supporting many programs that were organizationally on par with NCAA teams. His legacy includes the Men's and Ladies Icers Hockey teams, as well as the nationally recognized men's and women's rugby teams.


McCullough was a driving force in creating a club sports department supporting many programs that were organizationally on par with NCAA teams, but for the recognition and the existence of scholarships. His legacy included not only the Icers and later the Lady Icers, but continues today through the success of the Ice Lions and Women's Ice Hockey Club, as well as Penn State's nationally-recognized men's and women's rugby teams.

Other than new program-type stuff, making offseason news is bad roughly 92 percent of the time. So here's to never, ever appearing in one of those types of posts again. 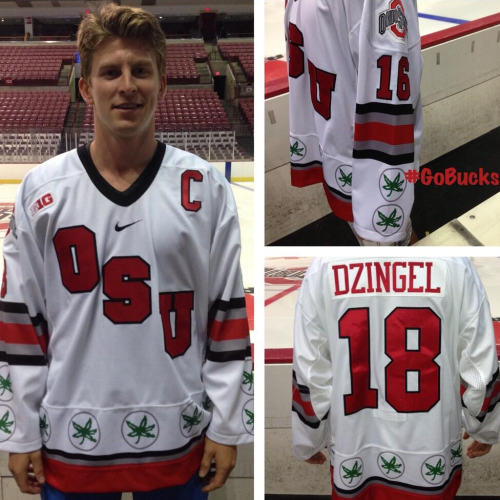 Ohio State has new alternate jerseys (above), and suddenly, I want to go get Taco Bell.

Although they include a few striping modifications, they're essentially a white adaptation of the jerseys the Buckeyes wore for the Frozen Diamond Faceoff, a January 15, 2012 outdoor game against Michigan in Cleveland. 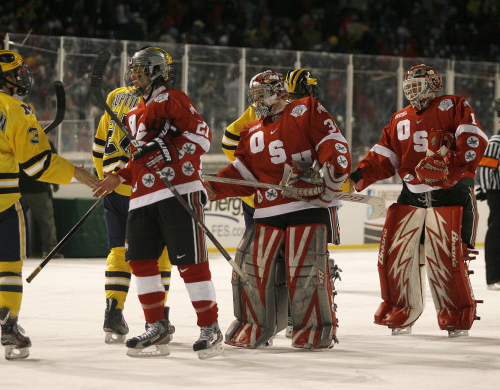 Just made you smarter than your friends on a completely useless topic. You're welcome.

Brandon Saad, the brother of former Nittany Icer George who became the first Pittsburgh born and trained player to win the Stanley Cup in June, got his customary time with sport's most iconic trophy on Thursday.

Karen Newman, Lauren Hart, Jim Cornelison, Jeff Jimerson, Rene Rancourt... anthem singers can become legends to their team's fans in hockey. If you think you're up to it, September 5th is a date you should circle.

Luke Bennett, a Rochester, NH-native forward who recently signed with Corpus Christi in the NAHL, is interested in Penn State. But not that interested.


Bennett has grown to like the western brand of hockey.

“I like the style,” Bennett said. “It’s a little different. It’s faster with less fights (than East Coast hockey). I’m a skill guy, not a fighter. I’m 165 (pounds). I’m not throwing around too much.”

Bennett plans to use his time in Texas to expand his game and draw D-I college attention. He mentioned schools like Western Michigan, Penn State and UMass-Lowell, but adds that in his heart he wants to stay in the west.

Last week, structural steel went up on RIT's Gene Polisseni Center. The 4,500-seat arena, which will replace PIA as NCAA Division I's newest hockey venue, is scheduled to open in time for next season. The Nittany Lion women, of course, will play there each year as part of the CHA schedule.

Despite the lost distinction for Penn State, it actually is quite fun watching someone else's dream building materialize. And if you still have the urge to hate, just remember that Polisseni Center broke ground during RIT's homecoming last October - a weekend that was spoiled (for Tigers faithful) by the PSU men and their big win in Rochester. 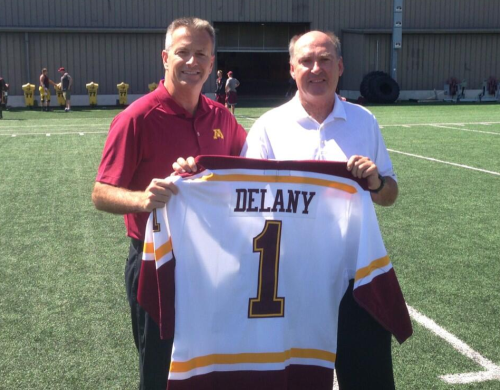 A quick bit of setup: Minnesota fans have been very vocally opposed to the Big Ten's "intrusion" into the hockey bubble because they'll miss their big games against Bemidji State and Mankato State Minnesota State-Mankato Minnesota State in the WCHA, or something like that. Furthermore, despite his pair of national titles, four Frozen Fours and seven conference regular season or playoff championships, they aren't exactly thrilled with their coach, Don Lucia, either. Because they're the State of Hockey, as they're more than happy to remind you, and if they don't win everything ever, THINGS WILL EXPLODE.

So with all of that out there and from a Penn State perspective, you can understand why the photo above, of Lucia (left) presenting Big Ten commissioner Jim Delany with a Gophers jersey, could be considered quite entertaining.

A quick, shameless self-link to share some news for the Twitter-free among you:

Really could not imagine things any other way.
Posted by Kyle Rossi at 12:05 AM