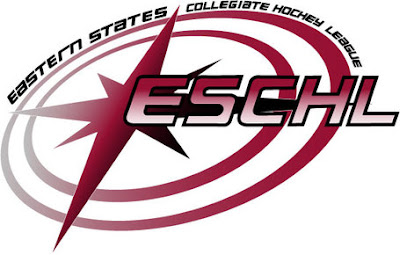 The Eastern States Collegiate Hockey League tournament gets underway at Rhode Island's Brad Boss arena tonight. Before we go any further, the schedule:

Below is a quick look at each ESCHL team and where they stand headed into the weekend. Along with the requisite paragraph-ish per team, I've included their chances of each possible tournament outcome. These are based on the ACHA computer rankings (the no-goal-differential version) done by some site that does a lot of these types of things and is linked on the ACHA website. Part of the explanation of those rankings reads:

I took them up on that and multiplied out the predicted win percentages against each opponent on the way to the championship. Where the opponent is unknown, I weighted it by the likelihood of each possible team making it to the round in question.

Yeah, I'm a nerd. I also have an uncanny ability to avoid doing work by any means necessary, which is why I've linked my posts concerning the Icers' games with each team, rather than take the trouble to, you know, come up with something new instead.

I don't think I fully appreciated Alan Dionne and Dan Lassik until I had the chance to follow them closely with the World University Games team. If there was a Norris Trophy in the ACHA, there's a decent chance they'd be two of the three finalists - and their absence for WUG is the biggest reason I'm not completely convinced of any meaning to the Icers' three-point alumni weekend against the Rams beyond the poll credibility PSU desperately needed.

Put those two guys together with a forward group led by Shawn Tingley, Kyle Krannich and David Macalino and a steady goaltending tandem of Andrew Marks and Paul Kenny, and you have yourself a pretty good team (one the Icers aren't done with after this weekend). Oh, and they're on home ice. And as top seed, they have a pretty easy path to the championship game. And I tried to qualify their season record against PSU and Delaware above to make it sound not quite as good. Basically, they're the deserving favorites.
﻿﻿﻿﻿
﻿﻿﻿﻿﻿2. Delaware (28-4-2, 11-3-2 ESCHL)

The Hens actually have the best power ranking in the ESCHL, but they take a hit on the percentage from having to play both Penn State and likely Rhode Island (specifically, there's 78.5% chance of seeing URI in the title game) while the Rams only face one of the Big Three.

Not much has really changed with Delaware since last time we saw them, which makes sense, because it wasn't that long ago. They're still ridiculously deep (12 players with 20 or more points, guys with two points per game who can't crack the lineup), and they still don't like us. They did stub their toe against Liberty on February 5th, proving once again that pink jerseys, while generally for a great cause, mean you're probably losing the game.

Penn State has never lost a game in the conference tournament since its inception in 2007-2008 (that's all three championships if you're keeping score) but will not be favored to build on that statistic - the Icers enter this thing as the number three seed, both in terms of the ESCHL standings and in terms of the power rankings.

I think it's fair to say that I have no idea how we'll do. Delaware's up first, and we split with them in December, then again in January. Flip a coin. Rhode Island would be the likely championship game opponent, and while they destroyed us on their ice back in November, PSU grinded out a win and a shootout a couple weeks ago with both teams pretty shorthanded. Flip another coin. The power ranking percentages, by the way, pretty closely follow my more simplistic coin flipping (which of course gives you 50%, 25%, 25%, respectively). The Icers have been playing with a decided sense of purpose since the second weekend in January, but with the trip to Newark now booked, does that soften the intensity level just a little bit? We'll see.

I'll deftly merge my usual pregame "Outside Reading" feature in at this point. First off, Steve Penstone checked in with Josh Hand and Tim O'Brien this week. Both interviews were conducted before the Icers learned that they had in fact made the ACHA tournament, so feel free to take them in the "we'll laugh about this someday" spirit. And to the question I raised in the last paragraph, both also seem to be taking this weekend pretty seriously, an attitude that hopefully includes the rest of the room as well. It's certainly not the big one, but why not win them all?

Good week for Collegian coverage too, particularly with today's look at ACHAs and goaltending column, as well as yesterday's piece concerning the Icers' underdog status. I've tried to give Mr. Barton and Mr. Garcia enough credit for their outstanding work this season, but I want to toss some to the photography staff too - look at the picture of Matt Madrazo in the second link. That's pro.

Penn Staters learned first-hand last weekend that you can't be flat-footed against these guys or Bryan Chiavetta and Luke Bennett will run your show. That said, score a bunch of goals and give up more is still their modus operandi. But that said, they have beaten every team in the conference this year except Delaware. If Robbie Fallick takes out a few star players on opposing teams, it just may be enough for the Colonials to make some noise this weekend.

Here's a re-enactment of the incident I just referenced, with George Saad played by Paul Newman. Okay, obviously, it's from Slap Shot and (legal disclaimer) you know what that means re: the language. If you're an idiot, blast it at work, and get fired/sued for creating a hostile work environment, it's not my fault.

Sorry Kenny, I don't make the rules. Well, okay, I make the rules, but not the power rankings. 0.1 though? Ouch. That seems harsh even if I was making fun of them, and I'm not. And I had to round up to get there. Really though, the Golden Rams, 31st in the power rankings, probably didn't need any more obstacles in their way for purposes of this little exercise. An extra game the rankings say they only have a 30 percent chance of winning, for example.

A positive? Okay, I can do that. The power rankings don't account for the fact that they turned over a third of their team halfway through the year, and since then, WCU has held their own - 2-6-0 against the ESCHL this semester including a win against Rhode Island, and only two of the six losses were by more than two. More specifically, they split with Robert Morris, Friday's opponent, and with URI, Saturday's opponent should they win. It's extemely unlikely they'll get further than Saturday, but don't count them out just yet.

For more on the WCU perspective, check out the Golden Rams Hockey blog's post on the ESCHL tournament. Actually, it's pretty well on point for everyone else too.
Posted by Kyle Rossi at 9:05 PM