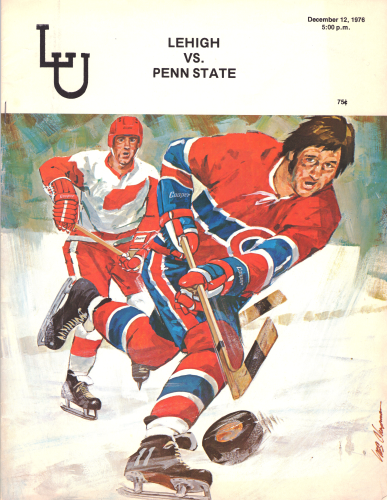 Somewhat surprisingly, given its location in Bethlehem, PA and its long history playing hockey, Lehigh University doesn't really have much overlap with Penn State through the decades, just 16 games in all.

The teams met twice, in 1939 and 1940, during the era when the so-called "informal team" that would eventually lead to PSU's first varsity attempt represented the university (the latter of these two meetings was actually a conference game, in the Pennsylvania Intercollegiate Hockey League that only lasted one season). After the Nittany Lions gained official recognition, two more games followed, in 1941 and 1942. Each of these first four contests was played at the famous HersheyPark Arena (then called Hershey Sports Arena) and each was won by Penn State.

After that though, the two programs diverged. A confluence of circumstances, many derived from World War II in one way or another, killed PSU's program in 1947, and hockey was dormant at the school until the birth of the Icers in 1971. Lehigh, while undoubtedly running into similar hardships, still managed to establish a university-recognized hockey program playing in the ECAC's Division II by the late 1960s (the ECAC's divisional system predates and sometimes conflicts with the NCAA system), later shifting to Division III.

Bill Riley Jr., best known for his 22 years (1969-1991), three NCAA Division II national championships and a subsequent, successful transition to Division I at the school now known as UMass-Lowell, got his start with the Engineers in 1968-1969 after graduating from Boston University. Riley is part of a legendary coaching family that includes uncle Jack, who led the 1960 gold medal-winning U.S. Olympic team and was the bench boss at Army from 1950-1986. Jack's sons Rob (1986-2004) and Brian (2004-present) have coached the Black Knights' since Jack's retirement, filling out what has to be the longest single-family coaching dynasty in sports history.

The Engineers - Lehigh's current nickname, Mountain Hawks, didn't come along until 1995 and is vastly inferior anyway - played at the Ice Palace in Allentown, a venerable rink that opened in 1924, but closed in 2004 due to competition from newer facilities in the area. Now residing at the Ice Palace's address of 623 Hanover Avenue: The Palace Banquet and Conference Center, named after the rink. This photo is from 1992, but I suspect the place looked pretty similar to this throughout the 1970s and 1980s: 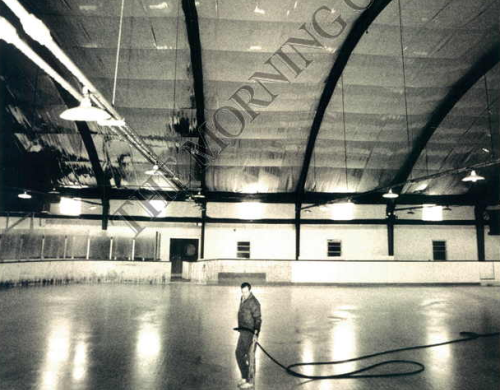 Apologies for the watermark. I attempted to hand The Morning Call money in exchange for a clean copy, but kept getting a 404 Page Not Found error when clicking on "buy." This is why you're dying, newspapers.

Penn State began scheduling Lehigh once again as early as the Icers' second season, and as one might expect with games between a nascent club team and a varsity program, the results favored the Engineers to the tune of an 0-3-1 record for PSU from 1972-1974 - although the Icers did manage the tie and an overtime loss at the original Ice Pavilion during Cahoon's season in Bethlehem.

After LU fell back off the schedule during Morris Kurtz's tenure (1974-1976), they returned for a game at the Ice Palace on December 12, 1976 - and a surviving program for the contest making its way into my hands more than 36 years later is the impetus for this post. The cover obviously led things off, so here's PSU's lineup card from the middle of publication (click to enlarge): 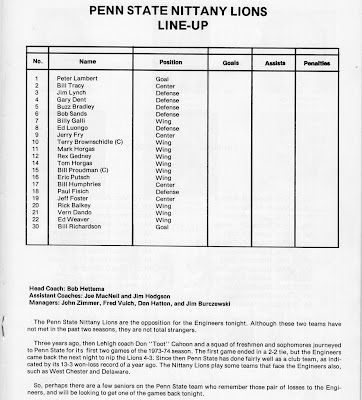 That more or less does it for the Icers portion of the booklet, although Lehigh's lineup on the opposite page refers to the Engineers' games with Penn State, among others, as "tune-ups for a crucial weekend series at Cortland State on Feb. 4 & 5." Ouch.

The program, as is often the case, functions largely as a vehicle for advertising sales, with Lehigh committing a full 17 of the 28 pages to the local business community. The other 11 pages are standard fare - the two lineups, a full roster and team photo for the Engineers, a schedule, a blurb about the university, bios for head coach Steve Penman and assistant Peter Bechtel (both bachelors, if you need that), headshots of the school president, athletic director, team members and support staff, and those officials' signals cartoons that have appeared in every hockey program ever. Oh, and this: 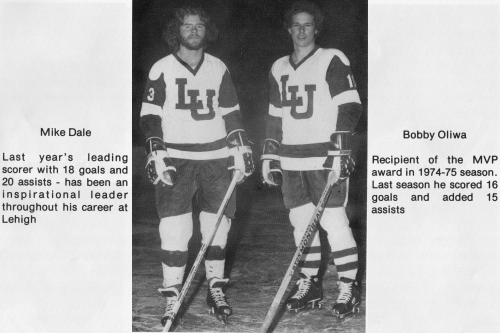 People really did have magnificent flow in the 1970s.


The December 14, 1976 Daily Collegian, unfortunately, only gives the events of that Sunday evening in Allentown a gloss-over treatment in the back half of an article also covering a 4-3 win at Delaware the day before the game with LU.

The Lions were involved in another close game against Lehigh but failed in a comeback bid and were defeated 7-5.

"After a strong second period we tied the score 3-3 and thought we could keep the momentum going in the third period," [head coach Bob] Hettema said. "We thought we were going to take over and skate them into the ice but instead we began to tire."

The Lions did appear to be taking the momentum away from Lehigh when Tom Horgas scored the go-ahead goal at 1:18 in the final period. But when Lehigh matched that goal a few minutes later, the partisan crowd spurred the Engineers on to victory.

Lehigh, helped by the come-from-behind win, finished 11-5-0 that season, including a 6-4 win at Penn State in a rematch on January 23, 1977. In a situation mirrored by Northeast PA neighbor Scranton during its failed NCAA DIII run two decades later, the Engineers' schedule was an odd mish-mash of club teams like PSU, Delaware and West Chester, as well as varsity programs including Fairfield, Iona and Cortland State. Arguably, LU's most impressive results were 9-2 and 11-1 trouncings of RIT on February 19th and 20th, 1977. The Tigers, now an NCAA DI program of course, would go on to win national championships in 1983 (DII) and 1985 (DIII).

After 1976-1977, Penn State and Lehigh met five more times over the next few years, with the Icers finding increasing amounts of success, starting with the schools splitting a pair of meetings in 1977-1978. PSU then won at the Ice Palace on February 16, 1980, and twice more at the first two Nittany Lion Invitational Tournaments at the then-new Ice Pavilion on February 13, 1982 and January 21, 1983. The scores of those NLIT meetings were 7-4 and 12-3, a far cry from just a few years earlier when the Engineers were too steep of a hill for Penn State's puckmen.

The sudden reversal of results, unfortunately, said as much about Lehigh as it did about Penn State. By the end of the 1985-1986 season, and due to "the tension of Title IX compliance and other financial pressures [i.e., division adjustment, staffing and recruiting, league affiliation, travel and arena]," the program "faded from the athletics department’s agenda." The Icers wound up with a 4-6-1 record against LU's varsity hockey experiment.

Five years later, in 1991, the school rebooted with a club program and played one of their first games on November 3rd of that year at the Ice Pavilion against an Icers team well established as one of the giants of non-varsity hockey by that point. Predictably, Penn State cruised to a 9-1 win in what stands as the last tilt between the Icers and LU. Scott Shell had a hat trick that night, supported by two Mark Konchar goals and a 3-on-5 shorty by Brad Russell.

That Lehigh program, now unfortunately called the Mountain Hawks, has continued to develop over the last 22 years. It joined the ACHA in 1996, increased its budget several times over, and grew its association with a now-cooperative athletic department. This past season, while playing in the ACHA Division 1 ECHA - a conference that, by the way, includes Penn State Berks - LU went 15-13-1 under first-year coach Tom Laessig, the father of Ice Lions alumnus T.J. Laessig and rising Ice Lions junior forward Neil Laessig.

Although it took a couple generations, the demise and rebirth of hockey at both institutions, and several other dramatic shifts in circumstances, it appears that Penn State and Lehigh finally have a relationship worthy of their proximity and respective histories.
Posted by Kyle Rossi at 11:30 AM

Email ThisBlogThis!Share to TwitterShare to FacebookShare to Pinterest
Labels: Breakout Past, History, Lehigh