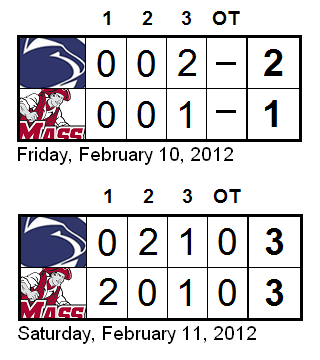 For nearly 45 minutes of Friday night's tilt, the story was goalies Katie Vaughan and Chelsea Corell of UMass. At that point though, as so often happens when trying to best Penn State's stellar sophomore, Corell blinked first. And last.

To the surprise of nobody who has been paying attention, it was Tess Weaver, Jess Desorcie and Taylor Gross doing the damage. It was Gross, with assists to her linemates, that punctured Corell first with 15:12 remaining. Considering how the game had gone to that point, a 1-0 result didn't seem out of the question. Five minutes later, Penn State took to the power play looking to put the game away.

It was there, though, that things took a turn. Massachusetts turned out to be the beneficiaries of their own penalty when Sarah Oteri beat Vaughan while shorthanded, the only blemish on her line against 40 saves. Desorcie negated that issue with 5:11 remaining - her 15th goal in just 11 games at Penn State - and the Lady Icers were victorious.

The next day's game didn't result in an ideal outcome. But it was the next best thing, as Penn State avoided losing on a weekend for the first time since November 4th and 5th against NCAA Division III Chatham. And, as you might expect, the team's trademark resiliency was readily apparent.

UMass struck first and second off of the sticks of Nicole Murphy and Oteri to take a 2-0 lead into the first intermission. By the next one though, the Lady Icers were tied again thanks to goals from Weaver and Gross, the latter of those coming with just 14 seconds remaining.

Oteri, though, scored her third goal of the weekend (one shorthanded, one on the power play, one even strength to reach three-fifths of a Mario Lemieux) early in the third to once again put PSU behind the eight-ball. This one, the even strength one, came within 1:50 of serving as a game winner. Desorcie, who buried a second result-deciding goal in two days at that point to force the draw, had other ideas.

Vaughan was once again a storyline on Saturday, turning aside 37 of 40. In all, she faced 81 shots in the two games and came away without a loss.

What's left now? The waiting, which is the hardest part according to Tom Petty. Votes for women's ranking number four, the one that determines the eight participants at the ACHA national championship tournament, are due on Wednesday. This means, of course, that Penn State's record for consideration is now complete. On balance, it's a pretty strong CV with a 5-4-1 ACHA record against the current no. 2, no. 4, no. 5 and no. 6 teams teams this semester. It sounds top-eight worthy to me. The team's ACHA record overall is 9-6-1.

Regardless of the Lady Icers' nationals fate, which should be known by the weekend, PSU will play two final home games on Saturday and Sunday against Vermont, followed by one final trip to Boston for the ECWHL playoffs on February 25th and 26th.
Posted by Kyle Rossi at 9:59 AM