On March 27, 2004, my best friend Tim and I set off from Selinsgrove, PA in his Pontiac Aztek, destination Johnstown. Our mission? To see former Icers Curtiss Patrick and Bill Downey play a game of professional hockey, as they had joined the ECHL's now-defunct Chiefs down the stretch of the 2003-2004 season fresh off of their senior years at Penn State.
If you've never made that drive, I can't recommend it enough. I learned, for example, that there is a town called "Water Street" in Pennsylvania. I guess it just started out as a street or something, then grew to the two or three streets it has today. It's a great drive for singalongs as well - I think we made about 20 cycles through American Pie, and keep in mind that this was without a CD and still before iPods were really a thing. So my belated thanks to the radio stations in the middle of nowhere.
Upon arriving at the Cambria County War Memorial Arena - which yes, looks pretty much exactly like what you see in Slap Shot - we learned that the cast of the seminal hockey movie was appearing that night. Well, not Paul Newman or the Hansons/Carlsons, just the people you don't really care about. We also learned that Downey was no longer with the team. Thanks for nothing, internet.
Unfortunately, I remember absolutely nothing about the game itself, not even who won. I do remember watching Patrick closely on every shift (since he was pretty much the only reason we were there by that point) and thinking he did pretty well for a guy who had his name misspelled on the roster.

As it turns out, according to the stats below, one of Penn State's connections to the legendary hockey family was also gone before they cared to figure out the whole "two s" thing - I attended his second-to-last game with the team. But he did go on to have arguably the most successful pro career of any Icers alumnus. He spent most of the next four seasons in the Penguins organization with the Wheeling Nailers, including a cup of coffee with the AHL's Baby Pens. He may be the only Icer ever to record points at the AHL level too (as far as I know, he is). While his time there was short, he did make an impression on Robb Rhodes of Brownsville, PA and his two sons, as told to The Hockey News:


Last season my family and I drove the four hours to Hershey to watch our American League affiliate team, the Wilkes-Barre / Scranton Penguins, do battle with the Bears.

After the game my two sons (Mite and Squirt age) persuaded my wife and I to take them to the Pens bus even though they came up short in the match.

We informed the boys the players would probably just want to be left alone and board the team bus, but to my surprise we were met by an enthusiastic Penguin player named Curtis Patrick; yes, of the same Patrick family that has given us a multitude of HHOF inductees.

Curtis was more than happy to coral his fellow teammate over to my sons to sign their playoff pucks and talk hockey to the boys for a few minutes.

My sons will never forget meeting one of hockey's true ambassadors of the sport. That means so much to our family.

Okay, they're not so good with the s thing either. Forgiven. Here are Patrick's complete stats:

And finally, here's the Chiefs program from that evening of March 27, 2004: 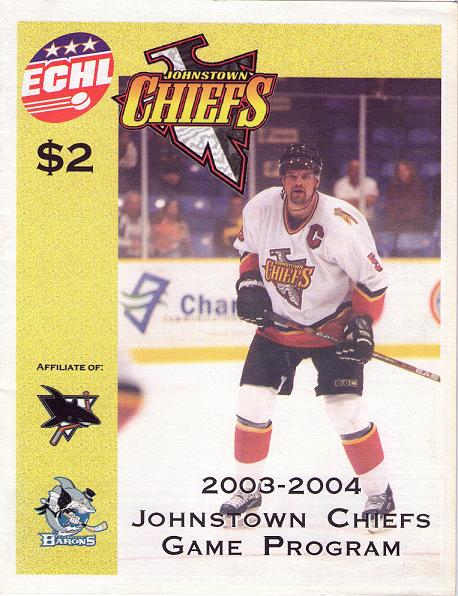 A program that's very proud of the fact that it costs $2. The contents of this folded-in-half piece of thick paper amount to a blank scorecard and a whole lot of advertising. Another folded-in-half sheet of paper with rosters, game notes, standings, and yes, more advertising is stuffed inside. I think I could do better. Oh wait, I have done better.
Posted by Kyle Rossi at 1:50 PM