Much to my amazement, Pittsburgh media was still in on Penn State hockey two weeks after the Three Rivers Classic ended. Matt Skoff, Michael Longo and George Saad - PSU's Pittsburgh connection - get a nice feature this time around.

I love how the CHA puts together highlight videos for their weekly and monthly award winners. This one, featuring Hannah Hoenshell of course, is kind of old news (it came out just after the last Three Stars), but I'm a huge Hoenshell fan, so... do yourself a favor and watch her second goal about eight times.

On Monday, Guy Gadowsky updated the media (unfortunately not including yours truly, as mid-week stuff is pretty well off the table for me) on what has become quite the rash of injuries, especially on the blue line. Getting Mark Yanis, who had been out with a fractured ankle since November, back over the weekend was nice, but...


Vote For Hobey 2013 Phase I
(hobeybakeraward.com)

There are about 28 billion players on the Hobey Baker Award fan voting ballot, which is used to help pare the preliminary candidates down to 10 finalists. None are Penn Staters (that would have been a separate post, obviously), but there are plenty of Big Tenners and Nittany Lions opponents.

Recommendation? With all due respect to Levine, Dzingel has been the best opposing player I've seen so far this year, and he's also a Big Tenner. Take that, ignore it, whatever, your choice.

Fate of UAH hockey program could be decided at next week's NCAA convention
(al.com)

The NCAA convention, which begins Wednesday in Grapevine, TX, may seal the fate of Alabama-Huntsville's program. WCHA representatives are expected to vote on UAH's admission to the conference while there, and a rejection might finally mean that the struggling independents have used up their ninth life. Obviously, here's hoping for the opposite outcome.

Vanderbilt's ACHA Division 3 team was crushed by those Chargers on January 5th, but that's not really the point, is it? Definite soft spot for stuff like this.

Just to keep the ACHA thing going, here's a pretty standard-issue "more schools should have NCAA hockey" article, but with the best factual error ever.


The way college hockey is set up is different from any other NCAA sport. There are four different levels of college hockey. There is Division-1 NCAA and than there are three separate levels of something called ACHA. The ACHA is a governing body of college hockey that oversees all other levels, mainly including club. Most schools who do not want or cannot afford a D-1 NCAA team choose this route.

Ouch, sorry DIII hockey. Also, I'd like to hear more about these non-club ACHA teams the Icers apparently played all those years. 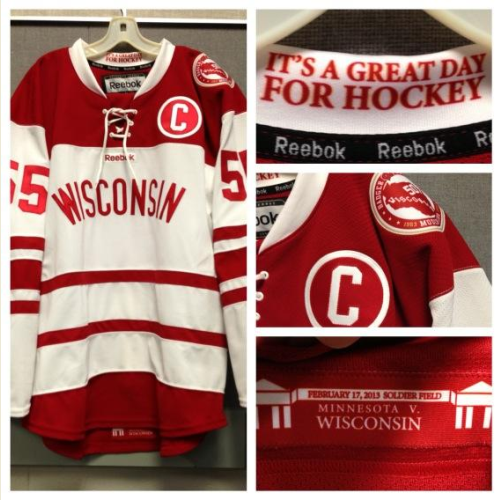 The Badgers unveiled their jerseys for the Hockey City Classic, a February 17th doubleheader at Chicago's Soldier Field that will see Wisconsin play Minnesota and Miami take on Notre Dame. I approve.

In hindsight, I'm kind of mad that Penn State didn't use the excuse of last season's outdoor game to come up with some kind of fauxback one-off jersey. Unreasonable? Not really - the Icers played a "third jersey game" from 2007-2008 through 2010-2011 before discontinuing it last season.

Why do we send millions to USA Hockey?
(Let's Play Hockey)

Whether you agree or not, this column does raise interesting arguments about USA Hockey's (over)regulation of the game... and the writer wins like 30,000 rhetoric points for using the words of probably the organization's biggest icon in his introduction.

Finally, best wishes to Bruce Marshall, who resigned as UConn's coach two months after taking a medical leave of absence (and two days after his team finished sweeping Penn State) for an undisclosed condition. From Marshall's statement:


"During my time away from the program, I determined that this decision was in the best interest for myself, my family and the UConn men’s ice hockey team. I am extremely proud of the accomplishments of the program during my time as a Husky and I wish nothing but success for the team as it continues to make the exciting transition to Hockey East for the 2014-15 season."

I've never met Marshall, but from the accounts of those who have, he sounds like a class human being and a great coach who was the driving force behind the Huskies' just-underway attempt to step up in status.

Assistant David Berard, who took over once Marshall went on leave - including against PSU - will finish out the season as head coach, and a national search for a permanent replacement will follow.
Posted by Kyle Rossi at 3:22 AM