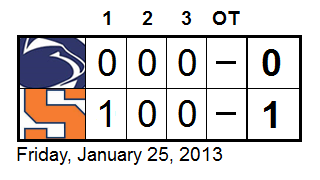 The progress, while not always evident in the won-lost record, is there.

Consider the first meeting between Penn State (7-15-1, 1-9-1 CHA) and Syracuse (13-11-1, 7-3-1 CHA) this season. In PSU's first-ever NCAA home game on October 13th, the Orange jumped out of the gate with 28 first-period shots en route to a 4-0 win. SU's top six forwards, including Shiann Darkangelo, Holly Carrie-Mattimoe and Nicole Ferrara, skated almost unfettered through the Penn State zone, and it was only due to a heroic goaltending effort by Nicole Paniccia that the score wasn't much, much worse.

No, the Nittany Lions still have not scored against Syracuse this season. And, considering the shooting and territorial discrepancies in the game Friday night, it's slightly disingenuous to suggest that PSU "nearly turned the upset" against the Orange, as the GoPSUSports.com recap said, even with the 1-0 score. But, given how this latest affair played out, it is accurate to say that they are closer to doing so than they were in October. Under Josh Brandwene's "get better every day" mantra, that's good enough for now.


The obvious standout in the game was once again Paniccia, who was her usual spectacular self with 45 saves. She was only beaten once, by Nicole Renault's first career goal at the 6:49 mark of the first period. Renault, on the play, took a pass from Melissa Piacentini just inside the blue line, carried down the middle, and veered to the right just in front of Paniccia before firing home.

Penn State certainly had chances of their own. Jill Holdcroft was once again feisty and disruptive, creating havoc deep in the Syracuse zone, while Shannon Yoxheimer - who had an outstanding third period - Micayla Catanzariti and Hannah Hoenshell also had notable close calls. With 44 seconds remaining in the game, Brandwene used his timeout to get Paniccia to the bench, and consecutive faceoff wins led to attempts on net by Yoxheimer and Jordin Pardoski, but the former was blocked and the latter missed, allowing the Orange to run out the clock.

While Saturday's rematch at 2:00 p.m. is the obvious target for redemption, it might also be appropriate to take a look ahead to the CHA playoffs during the first weekend in March. Although current second-place Syracuse is three points clear of Robert Morris, it's still entirely possible that Penn State will head back to Tennity Ice Pavilion for the 3-6 first round matchup. At the rate the Nittany Lions improved from October to January, is anyone betting against PSU for that hypothetical matchup with the Orange in five weeks?

Here's the live blog from a tough, yet encouraging, loss: