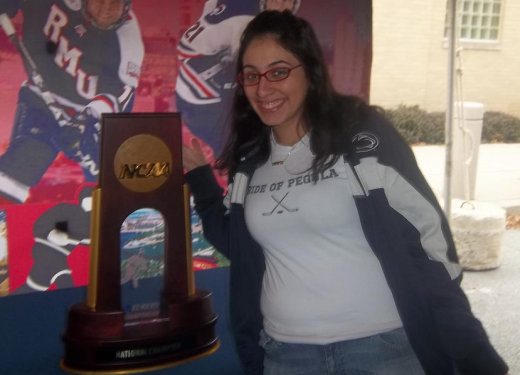 In case you're wondering, the Marine Corps logo on the back of Meyer's headgear is a shoutout to her brother Zach, who is currently serving overseas.

The Ice Lions look to be absolutely stacked this season and should be serious ACHA Division 2 national championship contenders. Here's an excellent article breaking that all down.

Prior to the team's starting with a 3-0 weekend this past Friday through Sunday - more on that later - Joe Zitarelli was named the team's captain. He'll be assisted (alternated?) by Mac Winchester and Chris Lewis.

A little background is in order. From last week's Three Stars:


Heads up: If you're going to be anywhere near Johnstown on Saturday, the NCAA championship trophy will be on Napoleon Street outside of the Cambria County War Memorial for viewing and photographs as part of the celebration of the Johnstown Tomahawks' first-ever home game.

Take a photo of yourself wearing Penn State gear with the trophy, and you get to be first star in next week's version of this post. I'm completely serious about that.

Brittany Rosen and Aaron Griffin took me up - that's Rosen at the top, and I'm truly sorry if you needed me to tell you that.

By the way, she's wearing a Pride of Pegula t-shirt under the jacket (available here - I own one myself). Also be sure to check out Cornell blog Where Angels Fear To Tread, because Griffin and Rosen manage to pull double duty on college hockey allegiances and write their own blog while remaining engaged readers of this one, all while working on postgraduate degrees more difficult than mine. Presumably, they didn't eat cake for dinner Sunday night either. Basically, if they weren't cool, I'd hate them. 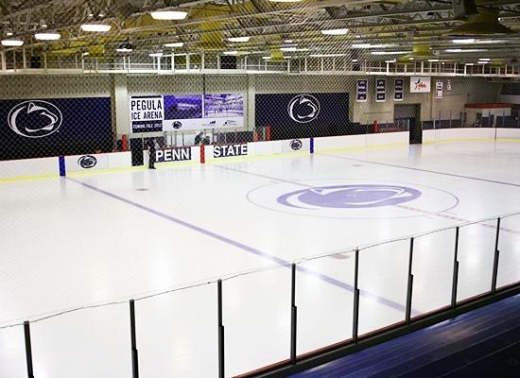 Here's a quick look at the Ice Pavilion as it will appear this season, following some cosmetic cleanup, including the addition of giant wall decoration telling us that yes, the Pegula Ice Arena opens next fall. Thanks, wasn't sure about that. By the way, the opener will be October 11, 2013 against Army. Pass it on.

My favorite thing about the photo? Those ACHA national championship banners (three are visible right next to the giant blue backer to the visitor's bench, the other four are out-of-frame to the left). The fact that those remain while most of the various conference and minor tournament banners have been removed is an encouraging sign as far as their appearing in the PIA. If the athletic department is willing let NCAA hockey be played under those banners at the Ice Pavilion, why would a different building change things?

Among the latest entries in Derek Meluzio's series of central PA goalie previews is this interview with Paniccia, who transferred in from UConn to join former Husky teammates Taylor Gross and Jenna Welch.

The women's team's "meet/countdown" videos are winding up - there's a game Saturday (!), after all - but the last week has featured Katie Zinn and Taylor McGee along with the headliner. Why Catanzariti? Because I grew up fifteen minutes from Gilmour Academy, her alma mater. Oh wait, Zinn went there too. Okay, because I follow her mom on Twitter. There you go.

Additionally, the men have gotten in on the introductory video thing, including Kenny Brooks, David Glen, Casey Bailey, Mark Yanis and Jonathan Milley.

The former Pittsburgh College Hockey Invitational, which will be played on December 28th and 29th, now has the equally-bland name "Three Rivers Classic." "Steel City Classic" was already taken, leaving the only other moniker permitted for an event in Pittsburgh as the default choice.

Regardless, the tournament should be better than its name with national power Miami and future Big Ten rival Ohio State involved this year, so getting in on the ground floor of what may become a PSU schedule staple - that's the plan, anyway - wouldn't be a horrible move.

Penn State is sort of an honorary Atlantic Hockey team this season, as the Nittany Lions play eight of the 12 conference teams a total of 13 times. With that in mind, it's interesting to note that beyond first-place Air Force, the PSU opponents didn't fare that well in the preseason poll:

That actually doesn't bother me in the least. As I've said, we're starting at the bottom - until proven otherwise, Penn State is the worst program in DI. But playing six of the bottom seven teams in AHA, as well as independent Alabama-Huntsville, will provide a quick opportunity to climb the ladder.

Speaking of Huntsville...uhhh yeah, it's perfectly normal to make a coaching change in late September. New boss Kurt Kleinendorst is definitely well qualified for the job, but there seems to be more to this story. We shall see.

...and speaking of polls, the first USA Hockey poll of the season is out. Here's how the PSU opponents rated:

In all, 29 schools received at least one vote, and there are 59 schools in NCAA Division I, so you can more or less stick Penn State in the bottom half with Vermont, which was picked a decisive last in Hockey East's poll. Low-hanging major conference fruit, ladies and gentlemen.

PS. If you're not familiar, polls mean less than crap in college hockey. It's a little like college basketball, where the NCAA selection committee chooses tournament teams on a number of criteria, none of which are the polls. Hockey's process, however, is much more straightforward and objective. We'll get to that at some undetermined future point though.

I'm not going to obsessively track PSU opponents' every move all season, doing so for Penn State is hard enough, but in the interest of "hey, this was the first weekend of regular season hockey," here's what our CHA opponents did on Saturday.

I recapped Friday's action in a post that night, in case you missed it.

This would be hilarious if it wasn't, I suppose. Stay hot, North Dakota.

Incidentally, PSU commit David Goodwin, scheduled to check in next year, was traded for Jordan Schmaltz (one of the players implicated in the story) in the USHL last season. I know Schmaltz is a highly-rated prospect and a first-round NHL draft pick from back in June, but I like our guy in that deal, to be honest. He's less stupid.
Posted by Kyle Rossi at 12:27 AM