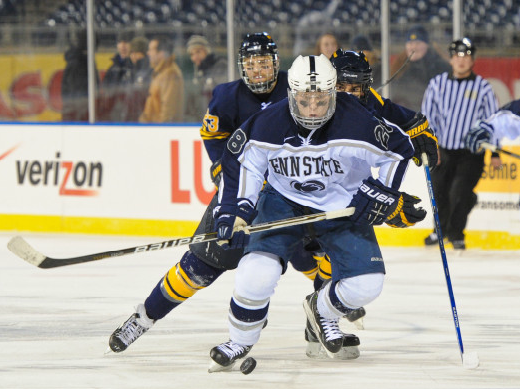 Goalie commit Eamon McAdam, in Russia with the Waterloo Black Hawks for the Junior Club World Cup, wrote a blog entry for the team's local paper covering the early stages of the trip.

Both player and team got off to an unreal start at the World Cup, as McAdam pitched a 27-save shutout in a tournament-opening 5-0 win over HC Energie Sunday. However, the Black Hawks fell back to .500 in the group stage with a 3-1 loss to Belarus' Dinamo Shinnik early this morning.

In this video, we learn that Luke Juha's favorite food is wings while roommate Curtis Loik prefers sushi. Juha's hometown is less than a two-hour drive from Buffalo, and Loik's from the west coast (of Canada), so I guess that makes sense. My favorite food, by the way, is sushi with a side of wings - I actually ate that for dinner last Wednesday - so I'm well on my way to becoming a DI hockey player. All I need now is actual playing ability.

Well played INCH, and thanks for giving Holey some love, great player who gets a little bit overlooked sometimes.

My next goal with respect to that site? Figure out what exactly makes them "an ESPN associate," given that beyond an ESPN widget on INCH (which could easily be added here if I got the sudden urge to crap-ify this blog) I've never seen any shared content between the two entities. I expect an answer within our established two-week turnaround period. Go.

The Wilkes-Barre/Scranton Penguins are doing their part to get the word out about Penn State's October 13th game in their home arena. Which certainly beats the alternative.

Penn State Hockey: Top Opportunities On & Off the Ice
(YouTube)

And to complete the set, here's a similar group Josh Brandwene did back in March:

Pretty safe to say I'm never going to break this record for video links in a Three Stars post. And there are plenty more coming. 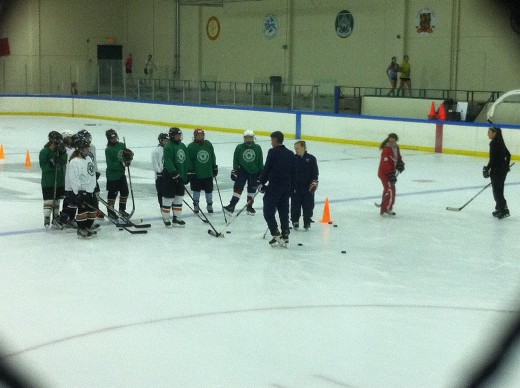 Nobody can ever accuse the women's staff of not utilizing one of the most effective recruiting methods, in my opinion:


A group of Penn State coaches are today's (August 14th) guest instructors at the Nichols Girls Hockey Camp in Buffalo.

One small beef I have with this video is that McLean is also the strength coach for the women. PSU didn't completely neglect that fact and also posted a "Meet Women's Hockey Strength Coach Robery McLean" (yes, "Robery") video - however, it was the identical interview right down to the Guy Gadowsky mentions. I've never done video work on any sort of professional level, but why not ask men's questions at the beginning, women's questions at the end, general questions in the middle, then chop it up as appropriate? I actually would have been really interested to hear how men's and women's training regimens differ, just as one example.

Confession time: When McLean mentioned "what the game does to the body" a couple times, I couldn't stop thinking of hockey ass. Also, I kept staring at the mirror in the background, in which you can make out the interviewer and camera guy.

The Muskegon Lumberjacks issued a Conor Garland press release quickly after his pledge to PSU last Monday (thank you for your expediency, Jacks), which led to several media outlets running short stories on it. This would be one of those.

I don't pretend to be plugged in when it comes to uncommitted prospects, but I wouldn't be doing my (unpaid volunteer) job if I didn't share this with you: during one of my "penn state hockey" Twitter searches, I saw a tweet from Quebec winger A-J Greer saying that he's taking a visit to PSU. Some creeping on his timeline revealed that the visit was Friday, and...

That's him in the video above, obviously. Last season, the 15-year-old scored 28 points in 41 regular season games, helping his team (Collège Esther-Blondin Phénix) reach the final of the Telus Cup, Canada's Midget AAA national championship. More recently, Greer was at the Beantown Classic just prior to hitting Hockey Valley, where he put in a good showing [PDF link] in front of numerous college scouts, including Matt Lindsay, the Nittany Lions' recruiting ace [PDF link].

In summary, can't wait to see what happens either.

The men's roster now has jersey numbers on it, so feel free to stick it to the NCAA by going out and getting your favorite player's name and number on a jer...oh, right, we don't have jerseys yet.

This release was a lot less dramatic than the women's version of the same thing, for the simple reason that the men have 16 returning players from the last Icers season, all of whom kept their numbers, while the women only have six such players, two of whom swapped out. By the way, 17 (Forrest Dell last year) and 19 (Dom Morrone) remain open. Hmm...

PA Puck, despite cutting the cord on their website after only five months back in February, still maintains and update a Facebook page. None of it is original content - they simply post links to items related to Pennsylvania's hockey teams - but it's still well done. At the very least, it seems as if they've learned from the fatal flaw of the website, in my opinion their overemphasis on the Hershey Bears at the expense of everyone else.

The bizarre YouTube saga (here's the background) involving former Penn State Brandywine defenseman Chad Thomas appears to have ended. I know you were dying for an update on that one.

There actually was a day when I would have preferred that Penn State be in the ACC. That day was before I had to concern myself with the well-being of Division I hockey programs. The fact that hockey isn't even considered here indicates shows that we still have a long way to go to reach the mainstream awareness that "hockey schools" enjoy.

The University of Delaware will host three ACHA national championship tournaments in 2014, including men's D1, women's D1 and women's D2. While women's D1 and D2 are always at the same site, it's unprecedented for the same host to get both genders in the same year. Fine by me, as they did an unreal job in 2011 (despite the fact that it was the worst nationals ever from an Icers standpoint).

This isn't purely a nostalgia-driven entry, as PSU's women's ACHA team could obviously end up in Newark in 2014. The 2013 men's D1 tournament will be in Bensenville, IL, while the women will head to Washington, DC.

So now the ACHA has a Heisenberg-style spreadsheet to track commits, and they managed to put it together without the accompanying unhinged rants about the CHL. Amazing. By the way, if you still care at all about the ACHA, make sure you follow Arizona's Twitter and Facebook. They do a better job of covering the ACHA than the ACHA does.

Wonder where we stand with those on top of the college hockey mountain at the present time? Wonder no more. Boston College's SB Nation blog has chimed in on the 2013 Pittsburgh College Hockey Invitational, which is...

To Build or To Renovate? - Questions about ECAC Hockey Identity.
(Where Angels Fear To Tread)

Colgate is apparently interested in participating in the college hockey arms race via a new arena. But should they? Here's a good look at the "build vs. renovate" question as it relates to that situation, as well as similar issues faced at different points by Cornell, RIT and Penn State.

Personally, I think programs need to be careful about seeing a new building as a panacea capable of glossing over other issues, because it's been proven time and again that the "if you build it" approach doesn't really work. I thought the most interesting thing PSU strength coach McLean said in his video interview (linked above) was that Penn State will have the nicest facilities in the country for the next three to five years. The reason for the limited window is obvious: others are going to build newer and nicer facilities as time moves forward. In ten years, the Pegula Ice Arena will still be outstanding and probably one of the nicest venues in the country. But it won't be the nicest, and for that reason, it's vital that PSU has a culture, an atmosphere, and hopefully some winning and NHL player development to draw people in by that point, because the arena alone won't do it. For now, and as a new program, the Nittany Lions need to be the best at something, and the building can be it. But once you have those other things, which eventually become "tradition," there's really very little reason to seek an entirely new building (as opposed to making occasional upgrades to the infrastructure, weight room, and things like that).

For a program like Cornell, the gain from a new arena - which, again, I don't believe is as great as most think - isn't worth the cost in terms of money and intangibles. Same for many other ECACers and some select others like Michigan. For others, including RIT, the answer is different. Where does Colgate fall? Where should they fall? We'll see, I guess.

So much for my hopes that this case would blow something up, preferably north of the border. Oh well. 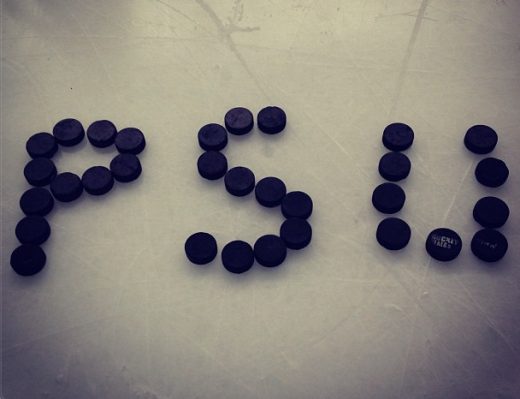 Freshman blueliner Jordin Pardoski, everyone. Yeah, we're all a little bit sick of it not being October at this point.
Posted by Kyle Rossi at 12:04 AM